The rag rugger is used to pull short strips of cloth (about 25mm x 80mm) through hessian backcloth. There”s no need to knot the strips, just so long as enough pieces are put in; the more bits of cloth in the hessian, the tighter the weave becomes – this grips the bits of cloth and keeps them from coming out again. This is the way people used to turn their old clothes into a rug, using a sack as the backcloth.

First take up two or three strands in the hessian backcloth with the point of the rugger and push it right through as far as it will go. There”s no need to be precise, it”s not that sort of craft, but taking up too many strands (more than 6, say) will mean the strip of cloth won”t be pinched tightly enough in the middle; and, even worse, one strand taken up on it”s own is liable to pull out.
Open the rugger’s jaw

Open the rugger’s jaw and grab one corner of the short strip of cloth.
Pull the strip

Pull the strip until it’s halfway through, with both ends sticking out of the hessian, and let it go. There, piece of cake; with a bit of practice you can do it without even looking.
The secret
The secret of rag rug making on hessian is to make the weave, of the hessian, as tight as you can. The way to do that is to keep the pieces of cloth close together so put the second short strip in, using exactly the same technique, two to four strands away from the first. It doesn’t matter which direction you go in and you still don’t need to be precise. It’s not a good idea to put two pieces of cloth into the same hole, in the backcloth, simply because this means more slippery materials will slide against each other and may come out – as long as each hole only has one piece of cloth in it you can make a rug from virtually any material, including carrier bags.
Just keep going
That’s it. Just keep putting more bits of cloth into the backcloth until it’s full. As the backcloth fills up you’ll feel it getting firmer.
Tips
You’ll notice straight away that the hessian, being loosely, woven frays alarmingly on a cut edge. Obviously the rug will have to be hemmed, but this isn’t a problem. Any method that stops the fraying will do but the easy way is to turn a hem in on top before you start. Allow about 50mm (2″), it’s not expensive stuff; fold the edge flat and work right through both layers. This means you won’t have to sew a single stitch and the edge will be extra strong. Tip: the corners will have four layers – the rugger will go through no problem but it’ll much harder to turn it to come out again so, just on the corners, push the point through from top to bottom; grab a corner of the cloth and pull it through just less than halfway; then go through again, a couple of strands away and get the other end. This’ll take twice as long but it keeps the job easy, and the rug will have really tough corners.
Cloth
Of course, you’ll need lots of little pieces of cloth but don’t worry – just take a look at ‘Cutting up the cloth’.
Cutting up the cloth

First, you need lots of cloth. Rag rugs are always heavy – they use a lot of material. Fortunately there’s plenty of old cloth about. In their heyday rag rugs were made by people who just couldn’t afford to buy a rug; it’s the ultimate ‘hard times’ craft. Now that we’re swamped with cast off clothes it’s easy to find tons of cloth which makes this one of the cheapest crafts around ‘ so you can stay true to it’s traditions and save money at the same time.
Almost any type of cloth will do. Provided that it doesn’t actually disintegrate when it’s cut up it’ll be okay. A bit of common sense is all that’s needed – thin cloth will make a lighter, softer rug; thick cloth will make a heavier, tougher rug. You can even experiment with non-textiles – carrier bags work surprisingly well, for instance, and there’s certainly no shortage of them. Charity shops and jumble sales are usually the best bets for old cloth.

Once you’ve got your material it needs to be cut into small pieces – an ideal size is about 25mm (1″) x 80mm (3 “). Don’t worry – it doesn’t have to be a big job. Long strips, 25mm wide, can be either torn or cut. If the material naturally tears in a straight line (like woven cotton or poly/cotton) then snipping the edge and tearing away is the easiest answer; not everybody likes a torn edge, mainly because of the threads that come of it, but there’s always the option to cut. Materials that won’t tear in a straight line (like cotton jersey or poly fleece) can be cut into long strips surprisingly quickly by folding them several times, always in the same direction, and then cutting across the fold. Either sharp scissors or a rotary cutter and cutting mat will do the job. The strips you get this way probably won’t be dead straight but don’t worry – by the time they’re cut into short pieces it won’t matter at all. Tip: If you’re cutting folded cloth it’s a good idea to put a few clothes pegs along the folded edge, to keep the folds in place, before you start.

Having cracked the problem of getting long strips then comes the cutting them into short pieces, all about the same length, problem. The answer is a simple cutting gauge. This is simply a wooden baton with a groove cut along one side. 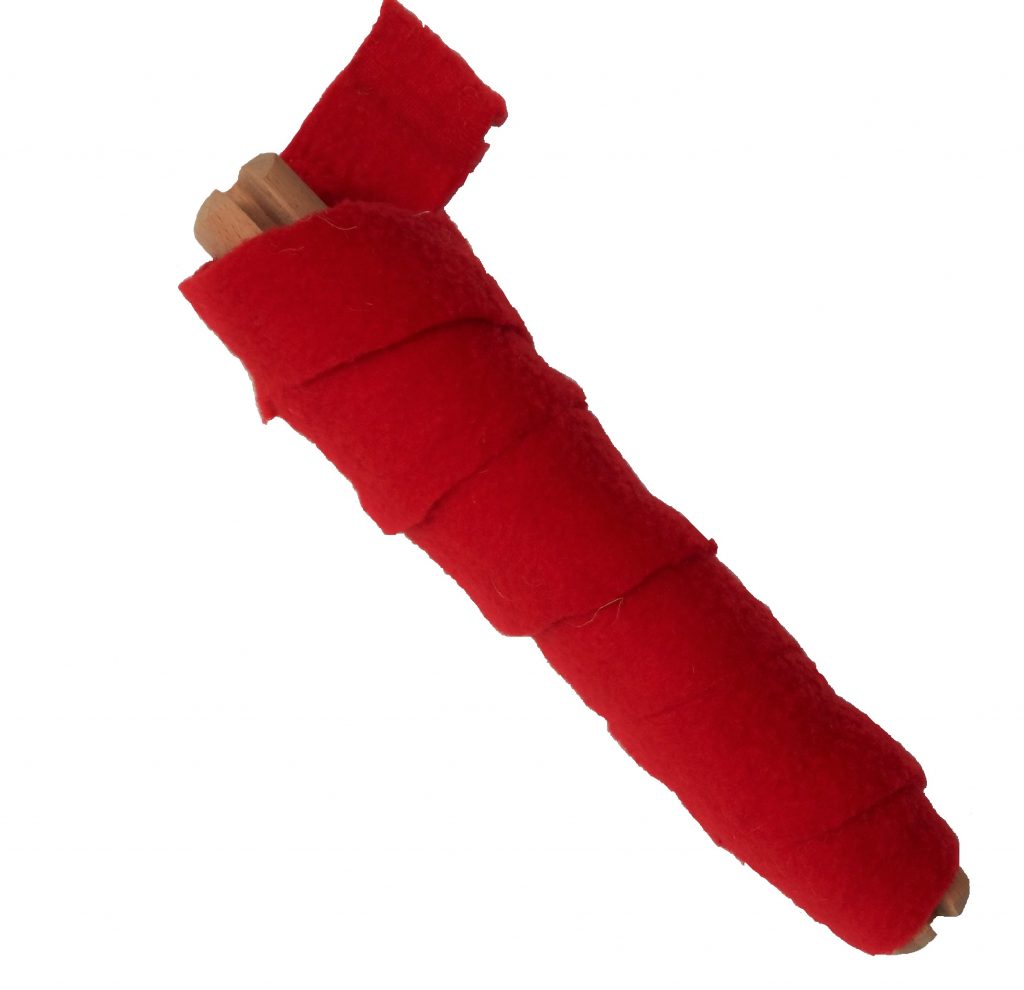 Wrap a long strip of cloth around the gauge, working along it a bit like bandaging a finger but keep going backwards and forwards. Wrapping several layers deep will make some pieces slightly longer than others, but the difference won’t be enough to matter. The only constraint is – don’t wrap more than you can cut.
Lots of short strips 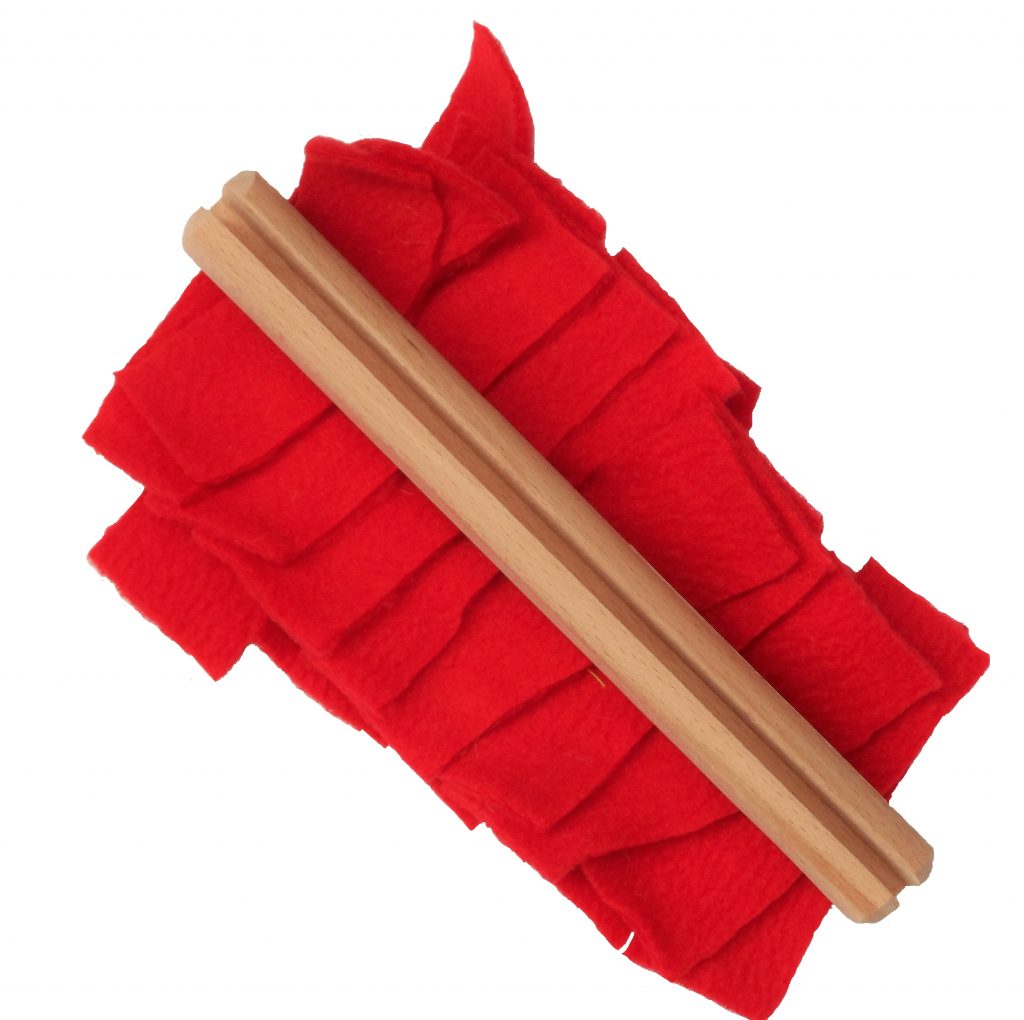 Cut the along the groove, in the gauge, with a pair of sharp scissors; a craft knife would do, but scissors are safer. There – lots of short strips, all more or less the same length.